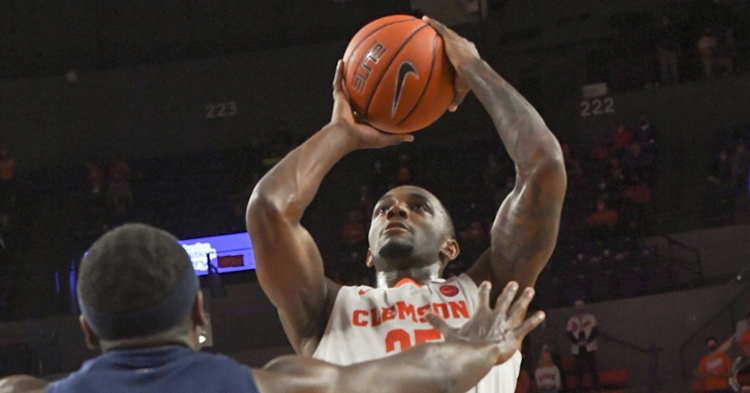 The Tigers have a more manageable path out of this pause. (ACC photo)

Once again the Clemson men's basketball team is facing an unwelcome break for COVID-19 protocol after building up momentum.

It's the second pause this season, which has postponed at least two games, Wednesday at Notre Dame and Sunday at Pitt, a fourth and fifth conference and sixth contest overall postponed this season.

Their recent run though, winning three-straight and four out of five, has them positioned well for March.

CBS Sports has Brad Brownell's Tigers up to a 5-seed in its latest bracket projections, ranking third-best on the seed list among ACC teams and facing potential MAC champ Toledo. ESPN and the overall Bracket Matrix average has Clemson as a 7-seed currently.

Clemson owns a top-10 NET win against Alabama (back in December at a neutral site) and all five losses have come against Quadrant 1 teams, combining for a 9-5 record against Q1 and Q2 opponents.

What Brownell has more of a roadmap on now is managing the break better, after four losses in five games came by 25 points per after the first pause in January.

The upcoming schedule is more manageable by the numbers, however, with the Tigers scheduled to head to Wake Forest next Wednesday (109), host Miami after that (131) and then Pitt (75). There is also a window to reschedule a postponed game in the last week of the regular season ahead of the March 9-13 ACC Tournament in Greensboro.