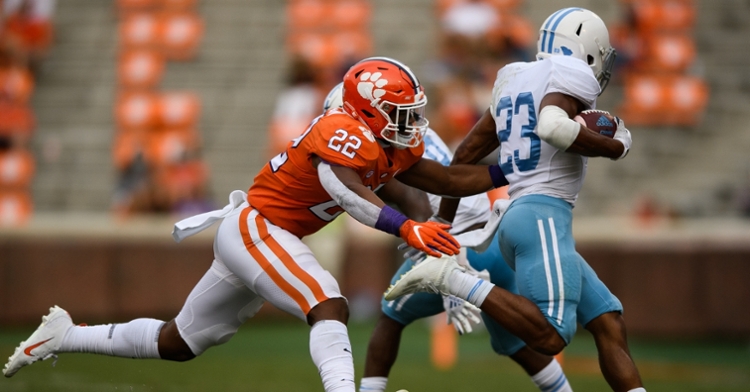 Trenton Simpson is expected to move into a starting role (ACC photo).

Spring football is right around the corner for the Tigers and we’re analyzing position-by-position how they look going into the next offseason phase.

David Hood: Imagine, if you will, that every single linebacker except for one is back for the 2021 season, giving Brent Venables perhaps the most depth and talent that he's had during his Clemson tenure. Mike Jones saw the emergence of Trenton Simpson at the SAM and transferred to LSU, the only loss for the unit.

Senior James Skalski returns for part of what will be an unreal sixth season, and he's the unquestionable leader of not only the linebackers but also the entire defense. The only downside to his return, and this is being completely nitpicky, is it might stunt the growth of some of the younger players. The upside is that those younger players now see what the target is and someone will take their game to the next level. This spring will be about those younger players catching the eyes of the coaches.

The starting spots seem to be set, and the true competition will happen behind those starters.

It's also a big spring for Simpson, who was impressive during his freshman season but still has plenty of room for growth.

Brandon Rink: Is that next wave ready to step up and make a bigger on-field impact? This spring gives some opportunity for a number of Tigers who showed some glimpses last season, as evidenced in some of those PFF grades above.

Simpson presumably gets the biggest window of opportunity Jones' departure. He got knocked in those same grades for being out of position at times as a freshman, but his playmaking potential is undeniable and he will get more opportunity to show that.

Maguire and Bentley did grade well in their reps last year, and you wonder -- with Spector returning on the weakside -- if they might get a look at one of the other two ‘backer spots as well this spring and beyond.

Simpson got his opportunities to shine as a freshman last year and it will be interesting to see if highly-regarded NFL legacy Jeremiah Trotter Jr. makes an impact out of the gates.