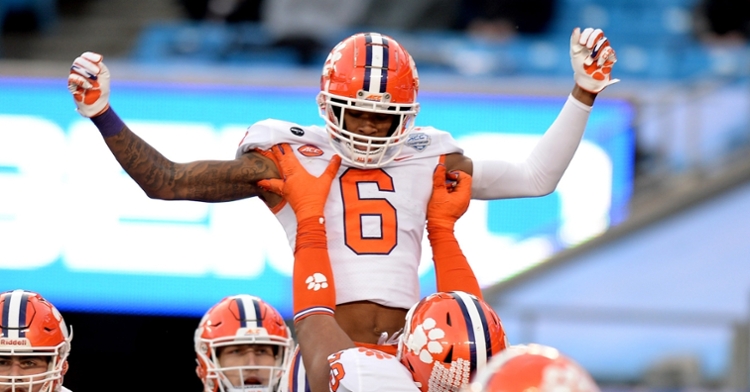 EJ Williams had a standout freshman season at receiver in 2020. (Photo courtesy ACC)

A cold, dreary rain and cloud cover settled over the Clemson area last week and stayed like in-laws who don’t know when to go home. But those clouds are supposed to break later this week, and with the sunshine and glimpse of warmth comes the start of spring practice. The outlook for the Tigers, as it has been for years, is sunny with a chance of championships.

Spring practice starts next Wednesday and this Clemson team is talented from top to bottom. Once again, the Tigers will be one of the programs expected to compete for an ACC Championship and a spot in the College Football Playoff.

There are plenty of veterans returning and several spots seem to be set (can you imagine someone taking over for James Skalski at linebacker?), but that doesn’t mean competition won’t be fierce at several spots. We are going to do more in-depth into the positional outlooks over the next week.

Spring practice will be notable for several reasons, including changes on the coaching staff. Danny Pearman has moved into an off-field role, offensive coordinator Tony Elliott has moved from the running backs to the tight ends, and CJ Spiller has taken over as the running backs coach.

Swinney joked on the radio last week that he might feel like asking Spiller to don a jersey at times, but he also said that Spiller is a “natural” as a coach.

“He's going to be awesome,” Swinney said. “He’s a natural. It was fun watching him the past year grow and mature. But he's going to be great man. He's a very smart, caring, detail-oriented, knowledgeable ‘Coach Spiller.’ He has a ton of experience at the highest level as a player. Now he's getting the chance to coach at the highest level in college football at a place he loves.

“I think it's a great fit and the timing was right and I'm excited to see him out there. Although there's still a time or two where I might want to slip him in. He can still do it. There's no doubt about that. It's like Michael Jordan with the Hornets. He can definitely still knock down a three if you need him to.”

Spiller, the No. 9 overall pick in the 2010 NFL Draft by the Buffalo Bills, played four seasons at Clemson, two under Swinney as head coach. He finished his college career with 3,547 yards, 32 touchdowns, 5.9 yards per carry, 120 catches, 1,362 yards and 11 receiving touchdowns.

Spiller recently was named to the College Football Hall of Fame.

“He was my first five-star, my first first-rounder, my first Pro Bowler, and now my first College Football Hall of Famer,” Swinney said of Spiller. “Hopefully there will be some more to come down the years, but it’s only fitting that C.J. was the first.”

When it comes to the team, Swinney detailed earlier what he is looking for this spring, and that includes a talented group of freshmen

“There will be a couple of wideouts that we think have a chance. We signed three guys,” Swinney said. “The Collins Towers is what I call them, Beau and Dacari, and then Troy Stellato. We are losing Amari (Rodgers) and Cornell (Powell) and we were young last year so we think those guys can help us. And then we are excited about the two backs that we signed, especially with Travis (Etienne) moving on. (Phil) Mafah is a big kid. And then (Will) Shipley is dynamic. And then he's being coached by the most dynamic guy I've coached and that's (CJ) Spiller, so I am excited about him coming on staff.

“And then in the trenches we've got Zaire Patterson and Cade Denhoff are two defensive ends that I think are going to give us some really good depth there. And this might be the best offensive line group that we've signed. These four linemen - they're big. This is a big, big, group, and we added Tristan (Leigh) late to the class, he's an elite tackle that I think will have a chance to help us early. And then probably one of these DB's will have a chance to help us as well, especially at corner.”

You would think that DJ Uiagalelei has the quarterback spot sewn up, but the competition at running back is wide open, as are the wide receiver spots. You could take a look at each one of the wide receivers who will line up at that first spring practice and say that each one has the opportunity to grab a starting spot – there are no “set in stone” starters at any of those spots.

The offensive line is another group that will be fun to watch – center Cade Stewart and left tackle Jackson Carman have moved on, opening at least two spots along the offensive line. You would think that Jordan McFadden and Matt Bockhorst have locked down starting spots, but the other spots are wide open and Robbie Caldwell will likely be taking a look at a lot of different players at lot of different spots as the spring progresses. In other words, don’t take a look at the first five that run out for drills and assume that will be your starting five against Georgia.

The defense and kicking games appear to be more settled, but Swinney knows it’s all just a matter of getting the right people in the right spots.

“We have 118 guys going through spring practice. We have every player on the roster except seven of these signees who are coming this summer,” Swinney said. “Twelve of them are already here. So it's evaluation and development and getting guys in the right position, it's the non-football stuff like the development of leadership and chemistry and it's the morale of your team. It's the position technique and fundamentals and all of those things. But football-wise, positionally, it's our offensive line. We have a really young group...

“We were really, really young last year, so it's taking a big step with that group. We have signed some really good players I am excited about. So it's about development there. And then getting healthy. We have five guys coming back who are six-year guys and I am so excited about that. I think 12 of the top-14 guys that started on defense for us are back. So really getting that defensive line and a guy like Xavier Thomas back full speed. Justin Foster is working his way back and he's trending in a positive way and I am excited about that. We had some guys that had some postseason surgery stuff we have to get healthy. But really it's the team stuff that is the biggest focus.”