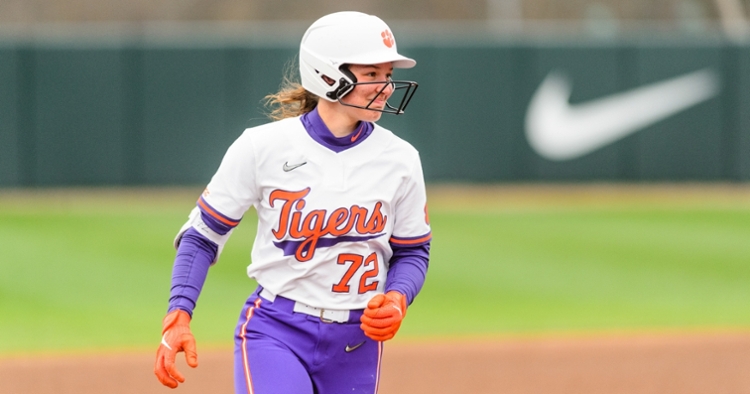 Valerie Cagle got off to a strong start last weekend.

The Clemson softball team will open the ACC portion of its season this weekend with six games within four days. The Tigers (2-0) started their season last weekend in Jacksonville, Florida, where they claimed two victories on Friday afternoon before having the rest of the River City Lead Off Tournament canceled due to inclement weather.

Clemson also opens its home season on Thursday against the No. 14-ranked Virginia Tech Hokies. Last weekend the Hokies opened their season with a weekend sweep over Kennesaw State. Virginia Tech is led by three Preseason All-ACC selections and have arguably one of the best pitchers in the ACC in Keely Rochard, who led the NCAA in strikeouts, wins, and shutouts last season.

There will be limited fan attendance at the softball stadium this weekend. First pitch for Thursday's game is scheduled for 1:30 p.m. A double-header is scheduled for Friday, with game one at noon and game two at 2 p.m.

After the three games at home on Thursday and Friday, the Tigers will head west to Atlanta for three games within two days against the Georgia Tech Yellow Jackets. The Yellow Jackets had themselves a successful opening weekend, picking up five wins and also ACC Player and Co-Pitcher of the week in helping Georgia Tech to their best start since 2013.

It did not take long to see the heart of the team that head coach John Rittman has put together. Last weekend, with the Tigers down a run in the final inning of game two, redshirt freshman utility player Valerie Cagle launched her second home run of the game over the center-field wall to help the Tigers remain perfect on the young season.

Both three-game series this weekend could see a lot of runs but could also see some great pitching matchups. We did not see Logan Caymol in the circle at all last weekend, but a possible Caymol/Rochard matchup in Clemson could be one of the most intriguing pitching matchups of the ACC season already.

All games are scheduled to broadcast online via ACCNX, with the games at Georgia Tech set for a 4 p.m. Saturday and 1:30 and 4 p.m. Sunday.

No. 25 Tigers sweep Virginia in Saturday doubleheader
Post your comments!