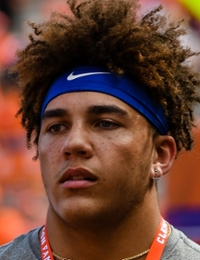 Offensive Tackle
B I O
Overview: One of the highest rated offensive linemen in the nation … ranked in the top 25 among all prospects by Rivals.com, ESPN.com and 247Sports … listed as the No. 15 overall player and a five-star prospect by 247Sports, which also ranked him as the fourth-best offensive tackle in the nation and second-best player from Virginia … Rivals.com listed him as the 17th-best overall player, the fourth-best offensive tackle and top player from Virginia … ESPN.com ranked him No. 22 overall as well as the fourth-best offensive tackle and the second-best player from Virginia … PrepStar five-star recruit and Top 150 Dream Team selection who ranked as the nation’s No. 34 overall recruit, including ranking as the No. 2 offensive tackle prospect and No. 2 player in Virginia … also played basketball in high school … also recruited by Alabama, Oklahoma, LSU and Ohio State … selected for All-American Bowl … recruited by Brent Venables and Robbie Caldwell … played for Scott Vossler at Robinson High School.